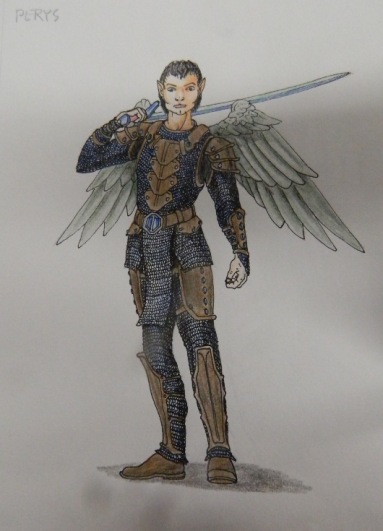 One of the more fun things about a Fantasy world setting is making believable races for that world.  Saivryth has the standard fantasy races, Elf, Dwarf, Halfling, Human, Dragon,  Gnome, each with their own heritage and social norms.  But Saivryth has other races too, I have Skinchangers, which are variations of Werebeasts, Satyrs, Snow Leopards, yes snow leopards are actually a race on Saivryth, Half Gods, and my absolute favorite, Hordelings.

I had a lot of fun creating Hordelings, or as they are sometimes called The Horde.  When I was first toying with the idea in a game I was running, I had no idea at the time just what fun this group of individuals was going to be, or that they would actually expand into a Race on the World of Saivryth.  They literally started out as a running joke about the numerous Half God offspring of Ninrath Dorain, God of Chaos and Lord of the Evil Gods and his various wives or lovers over the years.  But eventually I was getting into generations of characters that could trace their lineage back to Ninrath Dorain in some fashion or another, thus The Horde as a Race was born.

Your typical Hordeling could be described as a blend of Human and Elven or Human and Drow features, with large fluffy wings on their back, colored either dove grey or black.  They usually have some sort of minor Healing talent, with a major Magic ability attached as well.  They have a natural porting or gating ability.  The wings on a Hordeling are mostly ornamental.  They are not functional flying wings.  They do have to be groomed fairly regularly or they molt all over the place.  The wings also can be camouflaged with an invisibility shield to hide them.  And as an added bonus they are very sensitive to the touch in an erogenous manner.  Thankfully,  a typical Hordeling also tends to bond with their significant other, so that the erogenous manner of the wings is tied to the touch of their chosen partner.  Of course a Hordeling has to bond with said chosen partner first for that ability to kick in.  Another typical aspect of a Hordeling is the reproduction of twins as offspring, which is why the Race was called The Horde in the first place, they are truly prolific.